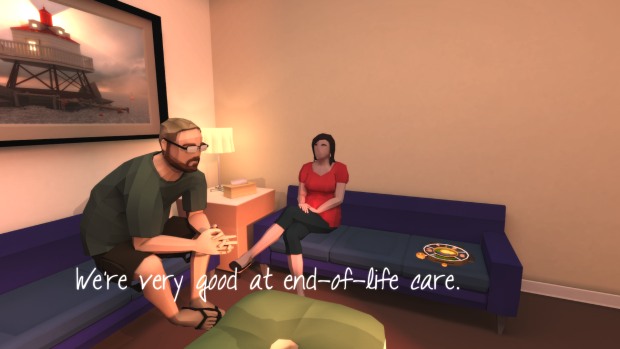 Remy Dixon explains to blogger Romana Teague that Jumper eats diaper chicken because it reminds the gator of a chubby infant.

YouTuber Foehamner was playing through the finale of Knee Deep’s first act recently. When he reached that moment in the game, he declared: “Too soon!” He also noted it was “extremely unfortunate coincidence.”

After all, his playthrough streamed just a week after a 2-year-old boy was dragged by an alligator into a Walt Disney World lake and drowned.

Too soon? Maybe not. We released Act 1 on Steam in July 2015, nearly a year ago. I can’t deny the discomfort of it showing up in a YouTube stream so close on the heels of the Disney tragedy, though.

It’s not the first time Knee Deep struck a nerve for someone. Earlier this year, a reviewer opted against playing and writing about the game because it touches on the topic of suicide. This reviewer recently had lost a friend who took their own life.

I felt terrible for him and replied that I understood his decision.

The game ventures into other topical territory that might be uncomfortable: cultural insensitivity, racism, divorce, drug addiction, poor parenting, unemployment, organized religion, and gun violence. It’s a tricky minefield to navigate when you’re setting a game in a place that could be real (Cypress Knee is fake, but my native Florida – freaky as stories from there get – is all too real), referencing modern-day celebrities like the Kardashians and Justin Bieber, and confronting issues that our players may deal with too.

Of course, Knee Deep’s obviously not the only game to tread into sensitive turf. That Dragon, Cancer tells the story of a real child and a real family fighting in vain against a terminal illness while struggling with their personal faith.

A serial killer stalks children in Heavy Rain. Child abuse comes up in Gone Home. Life is Strange includes a suicidal character. Kentucky Route Zero touches on economic woes, but with bit-graphic characters and a magical reality presentation. The upcoming Night in the Woods explores the economic struggles of a Rust Belt town with whimsical-looking anthropomorphic characters. 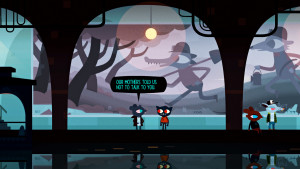 It’s definitely a good idea for developers to find ways to present touchy topics with sensitivity and maybe a bit of distance. Taking away the faces from the characters in That Dragon, Cancer (for example) helps by pushing the experience away from reality. But it also opens the door for the player’s imagination to fill in the blanks (that could be MY child), which can be horrifying. 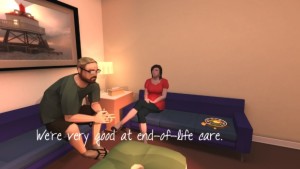 For Knee Deep, our saving grace may be that we’re just not too graphic about the hot-button triggers. We tell the story of Jefferson Dean Gallant’s baby – killed years ago by a gator named Merle – using one of the iconic diaper chickens on a hook at Jumper’s feeding time. One moment the chicken’s dangling over the pond. Lights go down. We hear a splash. Lights come back up. We see a slowly swinging hook with a shred of diaper.

We show people getting shot, but we don’t go full Tarantino with over-the-top bloodshed. Two people get crushed by a falling letter after the theater lights go dark. Someone’s electrocuted in a dunk tank at the festival, but that’s a lights-out moment like the diaper chicken.

Bad things happen in Knee Deep, but we never wanted to wallow in it. It’s meant to be satirical, evocative, and amusing.

The game’s a stage play. We aimed to present everything as theatrically as possible, opting to bend the narrative twists and presentation of the story enough to make clear it wasn’t real. Sure, the story takes place in modern-day Florida, but the Cypress Knee sets could be on a stage at the Durham Performing Arts Center in North Carolina.

We’re sympathetic with anyone made uncomfortable by what happens during the course of our story. However, we’ve got no regrets about how Knee Deep plays out.
Wes Platt is the lead writer/designer for Prologue Games. Their first game, an episodic narrative adventure called Knee Deep, launched its final act on Steam in March. Before that, he was a professional journalist for the St. Petersburg Times and Durham’s Herald-Sun. He designed collaborative real-time adventures at OtherSpace, Chiaroscuro, and Necromundus for players at jointhesaga.com. He also worked as a design lead on Fallen Earth, a post-apocalyptic MMORPG, from 2006-2010.