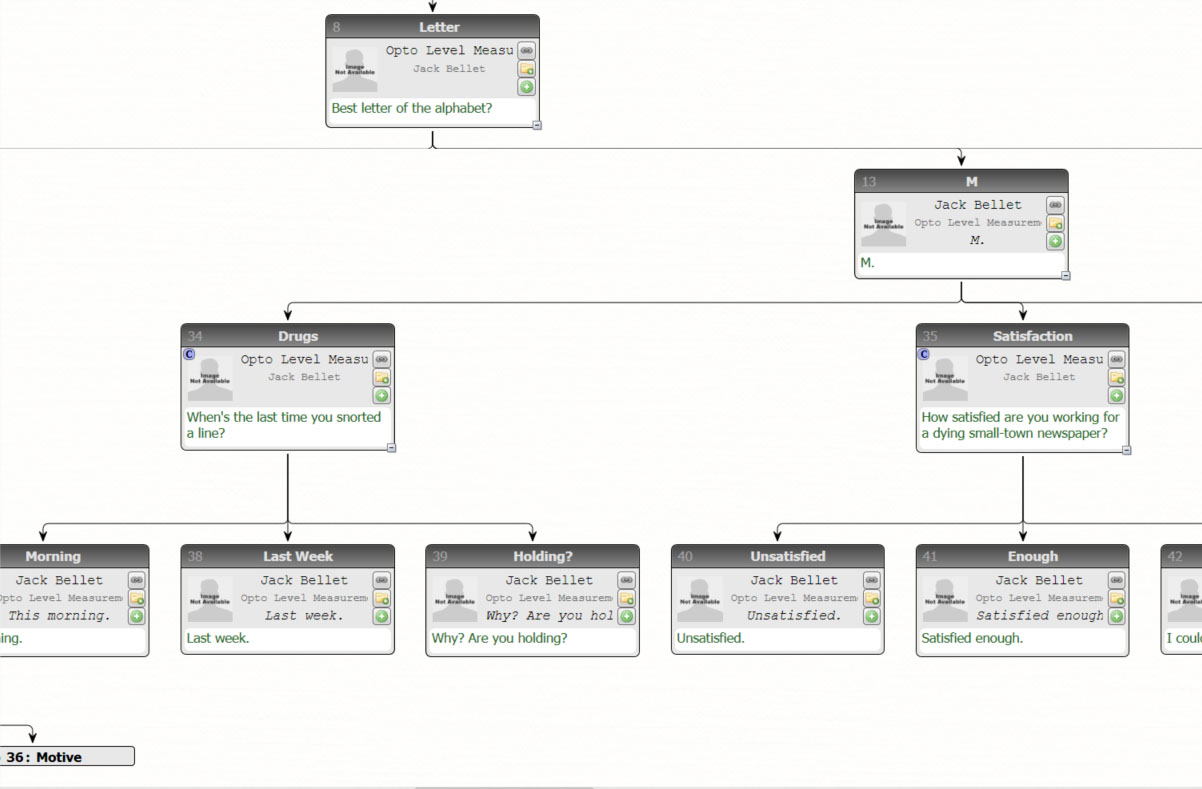 “Honey, no offense, but sometimes I think I could shoot you and watch you kick.” – From Raymond Carver’s short story “Intimacy”

As we’ve been developing the script for Knee Deep, we’ve been wrestling with common challenges in narrative gameplay. How do you tell the same story to thousands of players but let each person come away with a unique experience? We’re shifting focus from skill-based mechanics towards inter-personal drama – can we really provide an engaging narrative that people want to talk about? Well, let’s start with what we can learn from our personal experience.

The challenge of narrative design for a massively multiplayer online roleplaying game like Fallen Earth is that pesky “multiplayer” part. Giving everyone their own story never quite works. In a multiplayer setting, it’s the story created by the players apart from the supplied quests that allows them to truly personalize their own narrative.

In Vanilla World of Warcraft, where I spent a few years playing an affable tauren warrior named Stamp, everybody killed Onyxia eventually. But Stamp’s personal narrative evolved more from interactions and adventures with other players.

Even then, everything played out on such an expansive scope, across servers, through dozens of cities on multiple continents.

When I wrote on Fallen Earth, developing towns such as Depot 66, Watchtower, and Trailer Park, I did what I could to infuse them with memorable missions, interesting characters, and compelling narratives. But everything had to be designed with other players in mind, from making sure most missions could be picked up or shared by everyone to providing tougher-than-average boss monsters toward the end of a storyline to give groups a reason to work together.

“Knee Deep,” our swamp noir adventure-in-progress, takes a much tighter narrative focus that hews closer to the personal narratives I’ve encouraged on “OtherSpace,” a collaborative space opera story project that’s been evolving at jointhesaga.com since 1998. In “Knee Deep,” I know how I want the suspects and witnesses to the mystery to act, but I want players to have a lot of leeway in shaping the personal narrative of the three main characters. That doesn’t mean we’ll necessarily have an unlimited number of wildly divergent narrative possibilities – we’re ambitious at Prologue Games, but we’re not quite insane. But it does mean I want each person who plays through as hard-boiled private eye K.C. Gaddis, edgy Hollywood blogger Romana “Phaedra” Teague, or local reporter Jack Bellet to find their own nuances and pick interactions and narrative roads that make each experience unique.

As on “OtherSpace,” I want to provide a narrative framework that’s got shape, definition, tone, along with the flexibility to let players explore the creative space, giving the characters they play their own shape, definition, and tone. It’s not quite the same as the virtual “face-to-face” collaborations I’ve enjoyed, but it should be a happy medium.