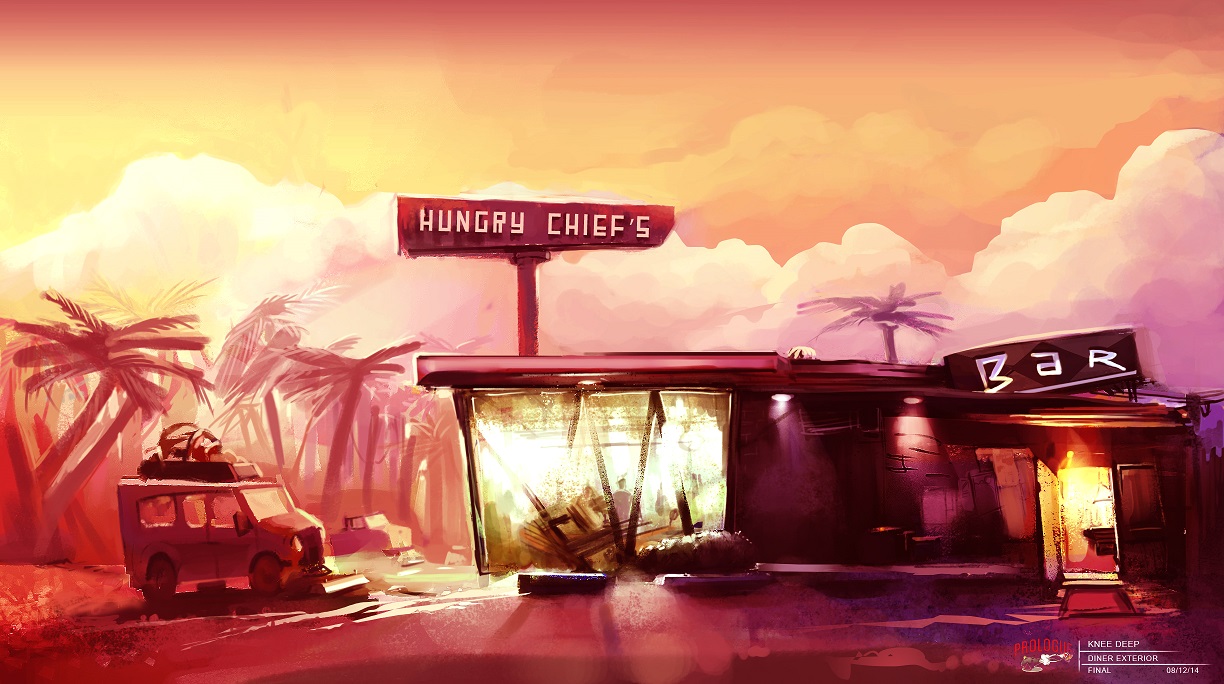 Working with concept art is fantastic. It’s a bridge from an idea of how a game should look to the actual 3D rendered game itself. My job is to make that transformation happen, to create functional 3D assets from 2D concept art. Sometimes the process of creating assets from concept art is straightforward.

Check out Hungry Chief’s diner, an iconic gathering point for many of our characters. The rendered scene on the right duplicates the look of the concept piece featured above with minimal alterations: A-frame windows, plywood bar sign, peaches-and-cream sunset, even the sign by the bar entrance has been carefully duplicated. Creating this scene was a matter of replicating the colors, lines, angles, and overall feel of the concept art as drawn by Mike Inscho.

For some assets, though, concept art sets a mood and tone, leaving me to create a more unique scene; instead of replicating the concept to the tiniest detail, the process is more creative and free. This was the approach I took to the Church of Us’s promotional RV. A mysterious religious group with a devout following, the Church of Us has set to evangelizing the town of Cypress Knee from the comfort of a luxury RV.

Church of Us branding design

When looking at this concept, I realized that the Church’s logo is the central visual element in the scene. As a result, I decided to tackle the design of the logo first and allow the scene design to flow from there. Beginning with a standard torus in 3ds Max, I rotated and manipulated it until I got a shape I liked. Next, I took a screenshot of the mobius strip and brought that into Photoshop; I colored it, then added glow and electron to the center. Our writer, Wes, provided me with a creepy slogan to finish it off: “Help Us, Help You, Help Yourself.” With the Church brand complete, I was free to create the interior space knowing that I had a visual style that I wanted to propagate into the interior space. Having already modeled assets, I unwrapped the scene and started applying the color scheme from the logo to the rest of the RV interior.

Even with the logo locked down, it was necessary to refer to Mike’s concept piece to make certain that the scene wasn’t straying too far from the original. It’s a good thing, too, because differences in the color palettes meant making hard choices about elements in the scene. I liked the grays, whites, and blues of the logo, but also the browns and reds of the original concept. In the end, I decided the best way to bring that over was a deep red wood that offset the cool colors in the rest of the space. The Church of Us is pretty extravagant, so marble floors and counters, and cherry wood dashboards and ceilings are in line with their image.

The finished scene communicates the lavishness of the Church of Us, their self-prescribed elite status, and modern style. I really enjoyed bringing this asset from a grey-boxed proof of concept to a completed game scene. For more about the development of our three-act adventure game Knee Deep, follow us on Twitch to catch our production live stream.