By Colin September 26, 2013 Uncategorized No Comments
0 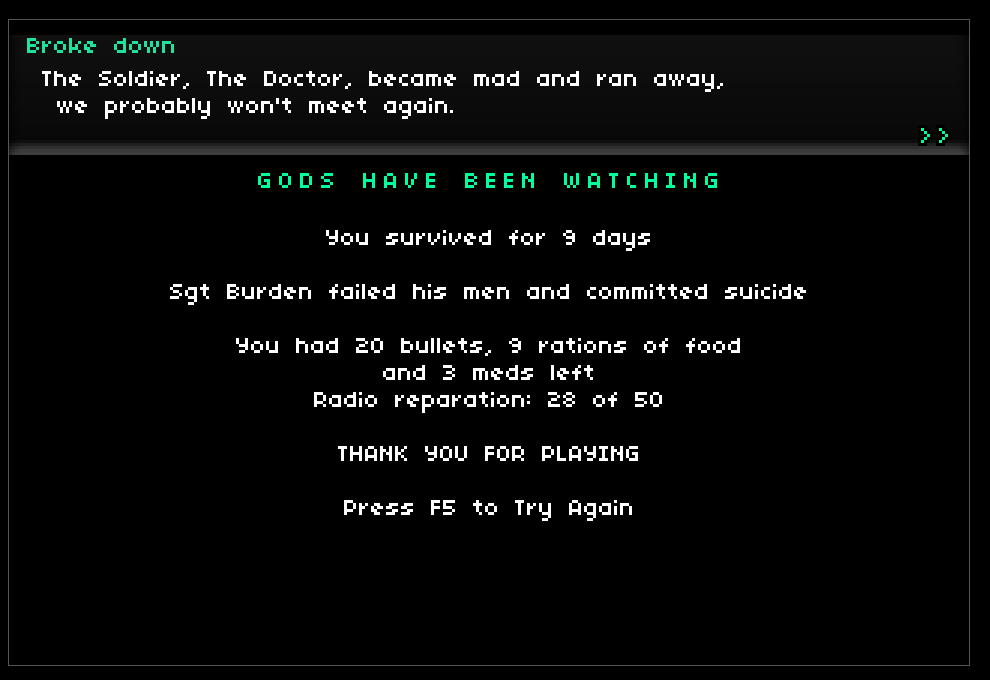 Here we are again, another Thursday, another peek behind the curtain. You may have seen a few weeks ago about Kentucky Route Zero and how I loved the strong creative vision and ability to live in the moment. This week I just have to share another amazing title that has really shaped how I view narrative in games.

Gods Will Be Watching is a great example of minimalist gameplay/visuals that maximize the setting/genre. A quick background, this game was built during Ludum Dare 26 (a 48 hour game challenge where teams are required to use a theme provided by the organizers and submit a completed game within 48 hours). What’s amazing about this game is the sense of atmosphere that it manages to achieve with such a light art budget. The entire game takes place in a single environment and only one character actually moves around the scene (you, as the leader of the team). Everything else is indicated through text dialogue or subtle animations.

It starts out benign at first. You talk to the engineer a few times and he starts to mention Sarah (who you later find out is his wife). But as you interact with the characters, you see that no one is named “Sarah”, just “doctor”, “soldier”, “engineer”, etc. It’s only through context and inference that you realize the psychiatrist is his wife. You often discover this if you happen to let the psychiatrist die, which triggers a mental breakdown in the engineer who quickly goes crazy and runs off into the woods.

On top of the subtle dialogue, the animations are great at telegraphing the gameplay state of characters. Everyone has a basic idle loop as they’re sitting around the campfire but if you watch closely, they start to develop nervous tics if they’re losing sanity or stop moving all together if they’ve contracted the medusa virus. It’s entirely incumbent on you as the player to watch and notice these telltale signs and act accordingly.

I could go on and on about the limited actions per turn, the painful survival decisions that require you to prioritize one team member over another, or the way that losing still feels like a holistic gameplay experience, but I just have to conclude that Deconstructeam did an amazing job at capturing the atmosphere of being stranded on a hostile planet and trying to juggle interpersonal relationships with the mission at hand. I want to capture the emotion of a situation like they do, implying relationships and drama without having to show everything on screen. If we can let the player connect the dots on their own, suddenly the game moves from exposition to participation and the player is in our world. That’s what great gameplay can do and hopefully we can gently lead the player to the same kind of experiences.