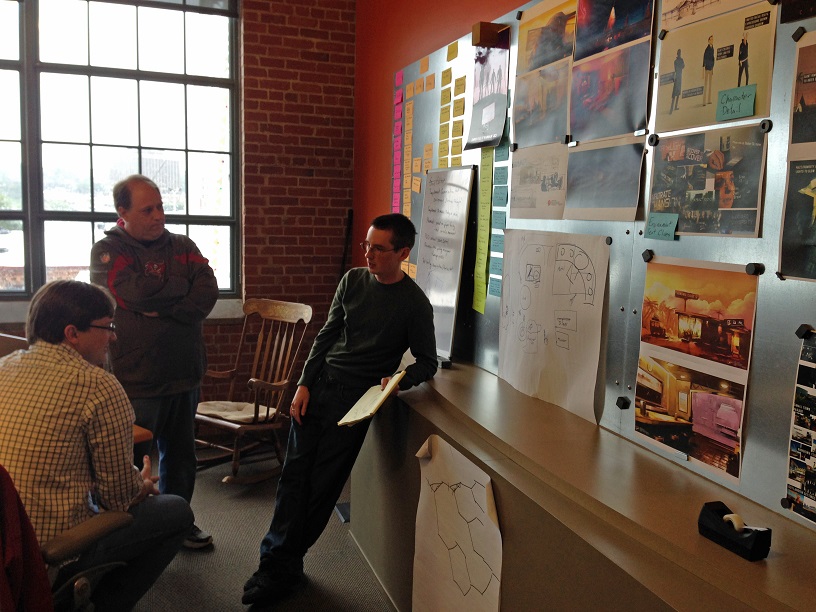 With our core team in place and essential pre-production work behind us, Prologue Games is officially in full production on our first title—Knee Deep. We’ve been staying quiet while we spun everything up but now we’re super excited to start talking about the game with the world!

Knee Deep is a swamp noir adventure in three acts. The story takes place in the fictional tourist trap of Cypress Knee located off I-95 in northern Florida. It’s a town past its prime and fallen into disrepair. If anything, the town is known for “Chief Roadside’s Wonderland,” a themed resort that is more of a tasteless affront to Native Americans than tourist attraction. When a washed up Hollywood actor is found hanging from the giant teepee water tower, the town suddenly becomes the center of attention once again. It’s up to you to investigate this curious death through the eyes of three different characters. As these perspectives weave together, you begin to see that there is much more at stake here than one dead actor.

So now that we’re in full production, what exactly does that mean? Well, our swamp noir adventure has transitioned from concept on paper to a functional, work-in-progress game. Simply stated, the game is taking shape and it’s no longer necessary to imagine its potential—scenes have been constructed, characters modeled, and conversations written. The team is settled into our office in Durham and has quickly turned our space into a creative hub for the game—covered in concept art, notes, and color-coded note cards.

Central to our progress has been Wes’s writing—the script for Act I is in place and the story arc for the proceeding acts laid out. This is ideal because now the focus shifts to refining the script and arranging scenes in order to best tell the story of Knee Deep. This is critical for any narrative game, but with three playable characters each with a distinct personality there’s a need for extra care and polish.

To create a look for these characters, we collaborated with artist Daniel Savage. His work in illustration and animation is phenomenal, which makes it no surprise that he’s worked with big names from Comedy Central and Microsoft to Kanye West and the Cosmopolitan Hotel in Las Vegas. For Knee Deep, the goal was to develop a unique look for each of the three playable characters. Daniel neatly captures the essence of each character in the piece below, employing a striking style that is expressive in its simplicity.

It’s remarkable to witness the game taking form, the idea of Knee Deep transformed into something real. The next few months are about evolving this work-in-progress to a stylish adventure. While there’s much still to do, we’re enthusiastic about our progress and looking forward to revealing more about the characters, story, and gameplay in the coming weeks!