From start to finish, you could play through as an oddball blogger, a cynical private investigator, and a grumpy print news reporter exploring the death of a Hollywood actor.

We liked the characters. We enjoyed the story. But we didn’t love the look. Nothing set it apart from other adventure games, like the distinctive cel-shade approach of Telltale or the moody shadows and bit-graphic characters of Kentucky Route Zero.

The game played with film noir tropes. It offered a Lynch-worthy gallery of strange characters. But put alongside other games like it, nothing really made it special. It was weird, sure. Just not weird enough.

We knew we could do better. Stranger.

This evolved pretty much organically into the idea of turning Knee Deep into the world’s biggest virtual theatrical production, set on a massive stage with luminous backdrops with iconic set pieces and silhouettes.

We weren’t just making a game anymore; we were putting on a show!

Concept artist Mike Inscho found inspiration for the new theatrical approach from plays such as Arthur Miller’s “Death of a Salesman.”

“I thought more along the lines of flat planes and actual set backgrounds and prop design,” Inscho said.

The new design philosophy also informed his color palette for concept work on assets such as Hungry Chief’s, the Mohawk Inn, and the Watch. 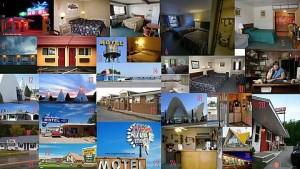 “The lighting of a stage show brings out strong contrasting color schemes,” Inscho said. “I wanted to keep each set design based around a triadic, or complementary, color scheme. Each act took place at a different time of day, so it allowed us to play with different lighting scenarios.”

His process for developing each piece of concept art “is pretty simple,” he said.

“It all starts with talking to the designers and artists. What are they looking for?” he said. “What influenced them for this part of the script? I will take good notes and start with a page of quick and rough composition sketches. Good or bad, the stronger concepts and ideas will be pointed out.” 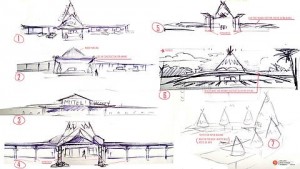 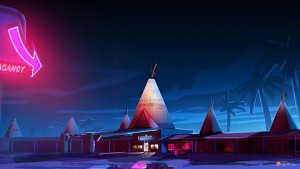 Those concepts played a major role in how Cory Farris, lead environmental artist on the Knee Deep project, shaped the 3D assets for use in Unity.

“Mike’s concepts translated directly into the game world on a one-to-one basis, almost without exception,” Farris said. “Viewing his concepts side-by-side with the finished assets, his influence on the final products is unmistakable.”

The change in Knee Deep’s presentation meant no one walked through doors – they approached buildings and the facades lifted to grant entrance. Time and space became more fluid, thanks to scenery shifts and meaningful changes in lighting. Still, the new approach came with challenges.

“Constructing the buildings as set pieces required a bit of planning,” Farris said. “How will this room be assembled and disassembled? Which wall of that building should be movable so that it can be properly used in multiple scenes? How does an RV open up to expose the interior while still retaining its RV-ness? These questions had to be answered in the mindset of both traditional theatrical set design as well as video game development.”

The lighting in Knee Deep proved as vital in a computer game as it would in a real-life theatre show, Farris said.

“It draws the eyes of the audience to the actor who is currently speaking,” he said. “Lighting calls attention to a new set piece to give a sense of place to the proceedings. The universe of Knee Deep embraced this whole hog. Set pieces that are coming up recede into shadow while those that the characters are interacting with are brought to the foreground with pops of color and characters are followed around on stage by spotlights. Lighting also allows for dramatic entrances by characters hidden in the shadows who emerge suddenly and change the trajectory of the story.”