You got some story in my strategy game 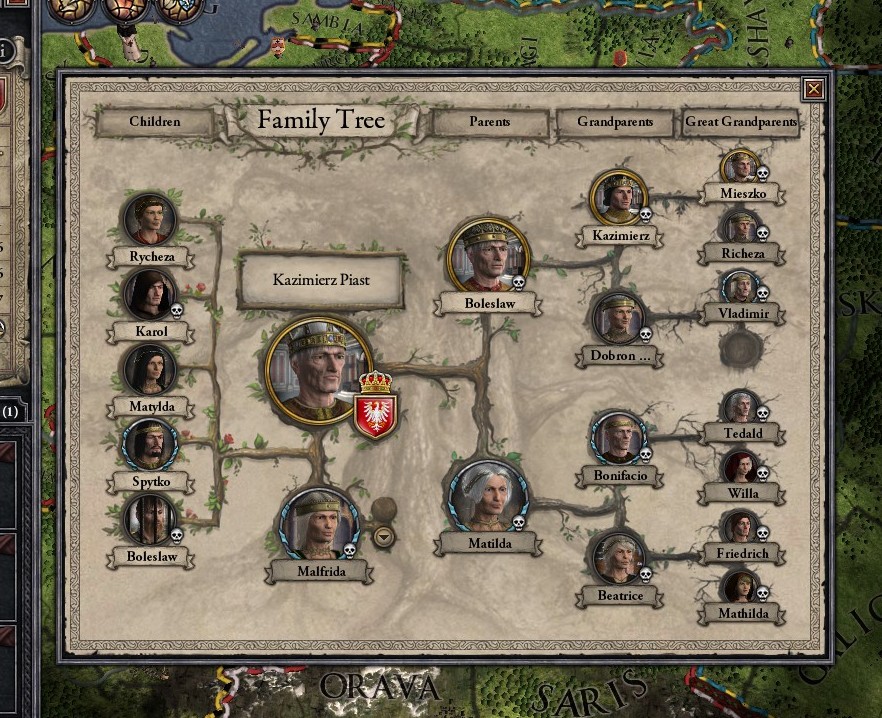 One of my favorite aspects of story driven games is when I start to mentally construct a narrative with no prompting from the game itself. So you can imagine my surprise when I was minding my own business, playing a grand strategy from Paradox Interactive and a complex story of family politics and intrigue materialized. Crusader Kings II is one of those games that somehow takes a relatively straight forward and well established genre and manages to tell a Game of Thrones style story without a single cutscene or line of dialogue.

It starts out simply enough – you are a ruler trying to expand your territory through traditional economic, political, or military development. You make alliances, discover that you can marry off family members to increase standing, and have children that will inherit your territory. But then you realize that your children, siblings, or distant relatives can start fighting over your kingdom. And then there are these icons that each character has describing traits like “wroth”, “chaste”, or “craven” and it seems to change how people feel about you?…

This seemingly small trick of applying modifiers to each character (“chaste” gives a bonus to piety but penalty to fertility) is the most genius portion of the game. It takes a simple stat game and turns it into a rich texture of character flaws, vendettas, and sabotage. If I know my second youngest son has a stronger set of personality traits to rule after I’m gone, I might send my oldest into a life of church service, marry him off to another ruler’s family, or outright kill him. This goes way beyond simply finding the best stat points, I’m mentally constructing these relationships and interactions with nothing more than those tiny badges.

As a surprising contrast, when CK2 intentionally tries to add story, it’s probably their weakest moments. They simply feel like a simple multiple choice question that does not alter the course of your kingdom nearly as much as the more minor personality combinations can.

I could go on about how the mechanics continue to reinforce an atmosphere of instability which only enhances the drama, but I should wrap it up here. My biggest takeaway from a game like this is how sometimes a strong story isn’t told by dumping text or dialogue on top of a character. Sometimes the best story happens when you’re not looking directly at it. Like a magician’s slight of hand, by focusing on the seemingly routine tasks, a surprisingly engaging story can jump out of nowhere. I hope to be able to recreate that sense of surprise when a player is a few hours into a fun game and discovers they’re also in the middle of an incredibly complex and engaging story without even realizing it.